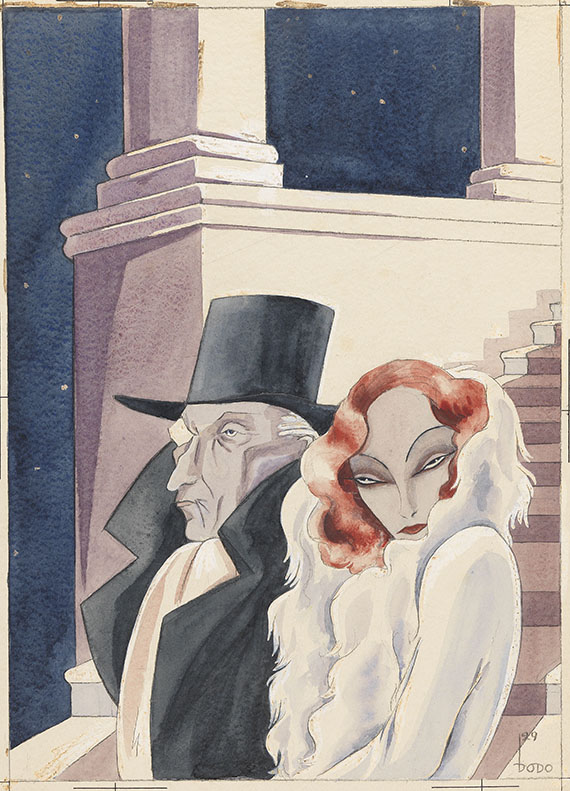 Long forgotten, it was not until recently that the work and life of a remarkable artist had been rediscovered: Dodo. In 1907 born by the name Dörte Clara Wolff the second daughter of a bourgeoise Jewish family in Berlin, Dodo decided for an artistic profession. With the support of her family, Dodo began an apprenticeship at the renowned private art and artisan school Reimann in Schöneberg in fall 1923. Dodo took courses in nature studies, anatomy, portrait drawing, decorative painting as well as for fashion and costume design with acknowledged teachers like Georg Tappert and Erna Schmidt-Caroll. After successful completion in September 1926, Dodo began he career as a free-lance graphic artist. She received numerous commissions right away, made sewing patterns for fashion magazines like "Vogue" and designed costumes for the show "Es liegt in der Luft", which premiered in May 1928 starring Margo Lion and Marlene Dietrich. Among the highlights of her artistic career were Dodo‘s illustrations for the satirical magazine "ULK", which, on a par with works by Jeanne Mammen, often adorned the cover or were printed in large formats.

The same year this sheet was made Dodo married the twenty-five years older jurist Dr. Hans Bürgner, with whom she had two children. Their marriage was in crisis when she had an affair with the psychoanalyst Gerhard Adler – soon their initially practiced menage a trois failed, she divorced von Bürgner and married Adler. In 1936 Dodo emigrated to London, because of her Jewish denomination, and continued working as an illustrator. When her second marriage with Gerhard Adler also failed, she again took up more intensive contact with Hans Bürgner, whom she married a second time after the end of the war in 1945. From then on Dodo was mostly dedicated to landscape painting, nudes and still lives, but also tapestries increased her oeuvre. Remote from public recognition over decades, Dodo‘s fascinating work and her impressive personality were rediscovered and honored in this year’s exhibitions in Berlin and London, as well as in publications and extensive press coverage.