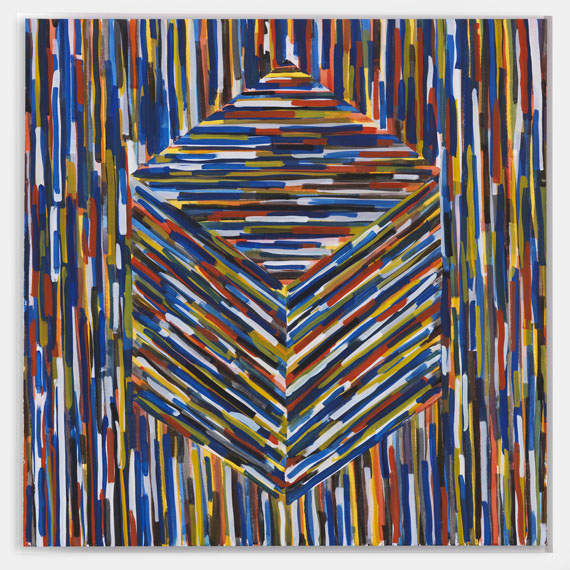 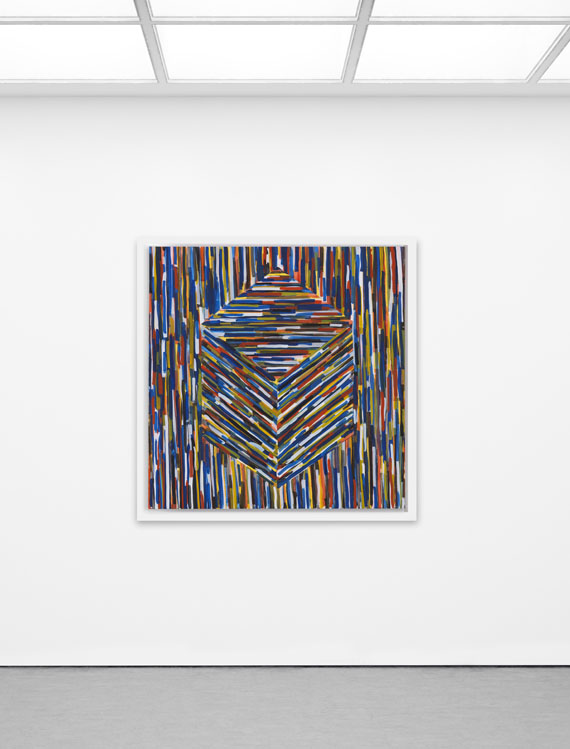 • Monumental gouache in which Lewitt stages his iconic motif in bright shimmering colors.
• The cube's geometrical form is the fundamental subject of Lewitt's artistic creation.
• This is one of the master's last products of his occupation with Minimal Art and the cube, shortly before its final dissolution into irregular grid structures.
• The monumental gouache "Four-Part Brushstroke" (1994) that was also made in this context, is part of the collection of the San Francisco Museum of Modern Art.

We are grateful to Mrs. Sofia LeWitt, The Estate of Sol Lewitt, New York, for kindly providing us with information.

There seems to be no other artist with an oeuvre so essentially linked to just one basic geometric form as is the case with Sol Lewit and the cube. The artist has been dealing intensively with this geometric form since the 1960s, and his findings soon made him one of the most important pioneers of American Minimal- and Conceptual Art. In the 1960s, an impressive sculptural work came into existence, for the conception of which Lewitt used serial sequences of the cuboidal shape. The result were fascinating black or white structures that, thanks to their grid-like structure and numerous openings, merge with their surrounding space. Based on these architecturally conceived structures, the cube remained the dominant theme in paintings, drawings and prints by the world-famous American artist. Regardless whether two- or three-dimensional, Lewitt's fascinating creation draws from the almost infinite variety of sequences, modulations and variations of the cube motif. Up until the 1980s, however, Lewitt's works were still subject to minimalist colors based primarily on the two non-colors black and white. From then on, however, his work opened up, became more powerful and dynamic in terms of color and also allowed for a visible brushstroke and colored internal structures. In the monumental gouaches of the 1990s, to which the present luminous work belongs, this openness reached a climax, as the dissection of the basic geometric form is taken to an extreme level. We still see a cube in "Cube (A)", although the dissolution of the formerly monochrome surfaces has been pushed towards a luminous arrangement of horizontal, vertical and diagonal brushstrokes in colorfully mixed nuances. The coloring couldn’t possibly more shimmering without sacrificing the subject, the basic geometric shape of the cube. And it is precisely this dissolution of the form that is characteristic of gouaches entitled "Wavy Brushstrokes", "Squiggly Brushstrokes" and "Irregular Brushstrokes", made around the same time as the present work, which would eventually lead to the monochrome, irregular grid structures of the "Irregular Grids", which Lewitt created a few years before his death. [JS]
Plus d'informations
+
Vendre
vous souhaitez vendre un objet similaire?
+
Enregistrement sur
Sol LeWitt
+
Questions sur l´achat
+
Contacter l'expert
28
Sol LeWitt
Cube (A), 1994.
Gouache on firm wove paper
Estimation:
€ 160,000 / $ 147,200
Résultat:
€ 375,000 / $ 345,000
( frais d'adjudication compris)
Plus d'informations
+
Vendre
vous souhaitez vendre un objet similaire?
+
Enregistrement sur
Sol LeWitt
+
Questions sur l´achat
+
Contacter l'expert
Ce qui pourrait encore vous intéresser
+
toutes les offres
Sol LeWitt - Objets vendus
+
toutes les offres