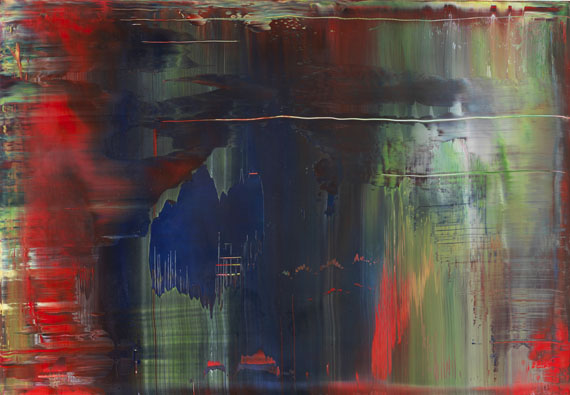 • Richter's "Abstract Pictures", which he created with a squeegee, mark the peak of his internationally highly sought-after and meanwhile completed pictorial oeuvre.
• Magnificently modulated squeegee picture in strong colors and high density.
• A year after this work offered here was made, Richter's creation was honored in retrospective exhibitions at, among others, the Museum of Modern Art, New York (2002), Tate Modern, London (2013/14), and the Metropolitan Museum of Art, New York (2020).

Essay
Richter's "Abstract Pictures" - calculation and chance, construction and deconstruction
Anyone who has ever seen "Gerhard Richter Painting", the 2011 documentary by Corinna Belz about Gerhard Richter, the undisputed super star of the German art scene for decades, will never forget the scenes shot in his studio: They show a highly concentrated creative process with an almost noiseless choreography that seems to follow an unpredictable script written by the artist. Every work step is conceived ahead of time with utmost precision, even if the result, an always individual color gradient realized with a squeegee, or broad wooden, rubber or aluminum spatulas, is unpredictable and therefore a coincidence. In his legendary "Abstract Pictures" Richter brought artistic calculation and chance into a perfect, always fascinating balance and this way found his unique artistic signature. The ongoing interplay of construction and deconstruction is also fascinating: what is already there must be destroyed first in order to make way for a new aesthetic impression. In addition, Richter is a merciless perfectionist, what his trained eye does not stand up to, and whether it is only a minimal imbalance in the composition or an imbalance in the color gradient, is either brought to completion with the highest precision or discarded. The result of this self-critical artistic selection is a consistently high-quality painterly oeuvre, of which our composition, developed from the powerful primary colors red, blue, yellow and green, is an outstanding example. The clearly visible strokes of the squeegee horizontally and vertically drawn over the surface, the gentle overlays of color and movement that preserves the underlying, highly concentrated act of painting in an impressive color density, are marvelous.

Gerhard Richter - an internationally celebrated lifetime achievement
Last year, the Metropolitan Museum of Art in New York honored the epochal work of the exceptional German artist with the grand solo exhibition "Gerhard Richter - Painting after all", which, like the retrospectives "Gerhard Richter. Forty Years of Painting“ at the Museum of Modern Art (2002) and "Gerhard Richter: Panorama" (2013/14) at Tate Modern, comprised a wide range Richter's works from the black-and-white photo images to his abstract squeegee pictures. The 89-year-old artist, who loves seclusion rather than the big stage, recently described the fact that his large-size "Abstract Pictures" realize record prices in the double-digit millions on the international auction market - in 2015 a work changed owners for 41 million euros in an auction in London - as "creepy".

"There is an end at some point" - the completion of the pictorial oeuvre
"There is an end at some point" are Richter‘s equally unpretentious words with which he recently announced the end of his painterly work; he decided that work number 957 in the catalog raisonné should be the last. "It's not that bad. And I'm old enough now." Now that painting with the squeegee, large spatula-like paint sliders, has become too strenuous, he only wants to create small-size works on paper. Accordingly, the next exhibition of 54 abstract works on paper, which Richter created recently and which once again show that Richter's artistic urge and technical mastery are still unbroken, is already in preparation at the Pinakothek der Moderne in Munich.
Even in his early black-and-white photo paintings from the 1960s, which, with the help of the subsequent use of broad brushes, transform an initially figurative painting into an impressively veiled parallel world, Richter never focused on the people portrayed, but rather on painting, painting that has its own individual starting point in the respective figurative motif. In an interview with the magazine Der Spiegel from 2005 Richter put it this way: "Actually, the factual aspect- names or dates - didn't interest me at all. It's all like another language that tends to disturb or even prevent the language of the image. You can compare that with dreams: They have a very specific idiosyncratic visual language that one can get involved with or that can be interpreted prematurely and incorrectly. " (Quote from: Gerhard Richter. Text 1961 bis 2007, Cologne 2008, p. 511). Accordingly, it the fact that Richter soon began to paint with his fingers and made inpaintigs of abstract compositions seems like the natural consequence. From the 1980s onwards he finally created his famous squeegee pictures, which would soon make the German artist known around the world. From that point on "Abstract Picture" became the predominant title of Richter's paintings, while descriptive titles such "September" (2005), a painting part of the collection of the Museum of Modern Art, New York, which shows a highly abstract account of a photograph of the World Trade Center after 9/11, are an exception. In his "Abstract Pictures" Richter first creates a non-representational composition with the brush, which makes for a sort of base composition that gives direction to coloring and color distribution, which Richter then transforms into a new, impressively mesmerizing aesthetic - as it is the case with the present composition - through color shifts, mixtures and overlays. [JS]
Plus d'informations
+
Vendre
vous souhaitez vendre un objet similaire?
+
Enregistrement sur
Gerhard Richter
+
Questions sur l´achat
+
Contacter l'expert
339
Gerhard Richter
Abstraktes Bild, 2001.
Oil on Alu-Dibond
Estimation:
€ 600,000 / $ 720,000
Résultat:
€ 1,500,000 / $ 1.800.000
(25% frais d'adjudication compris)
Plus d'informations
+
Vendre
vous souhaitez vendre un objet similaire?
+
Enregistrement sur
Gerhard Richter
+
Questions sur l´achat
+
Contacter l'expert
Autres images
Video 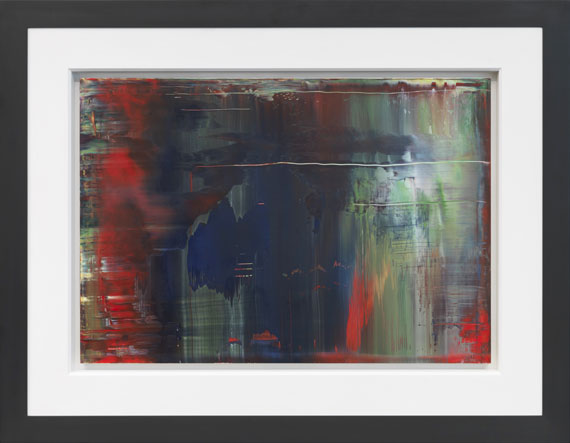 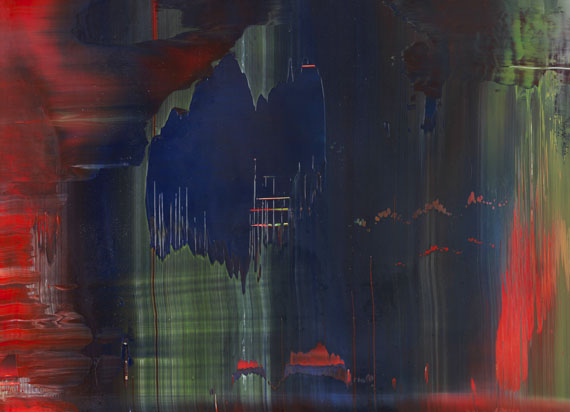 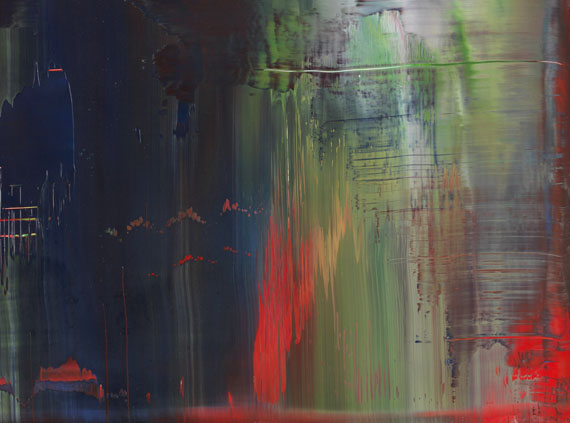 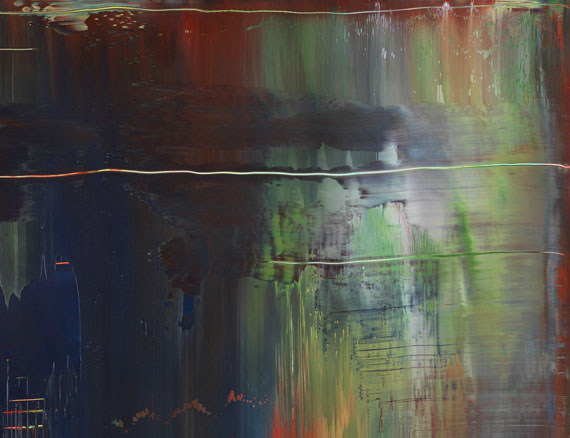 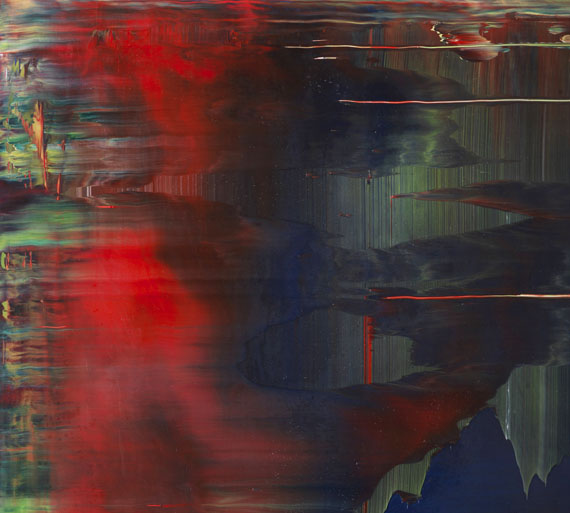 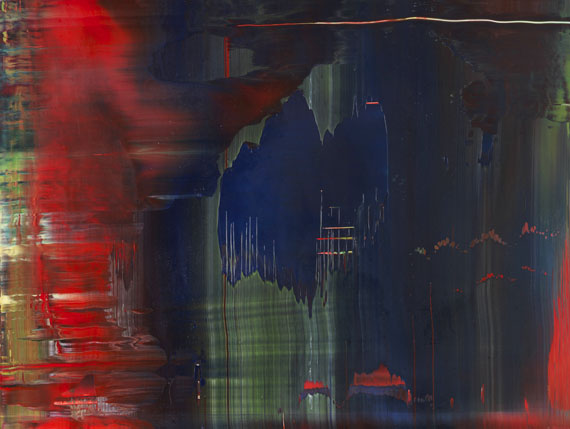 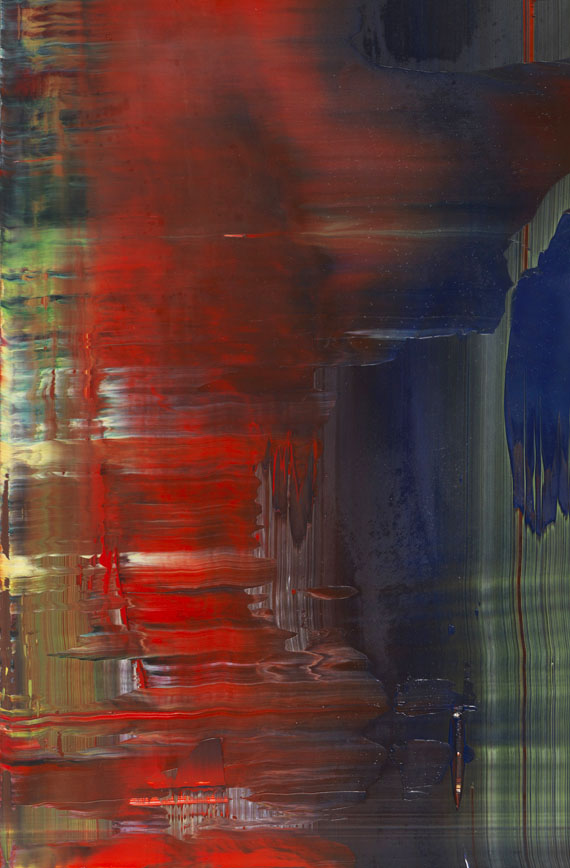 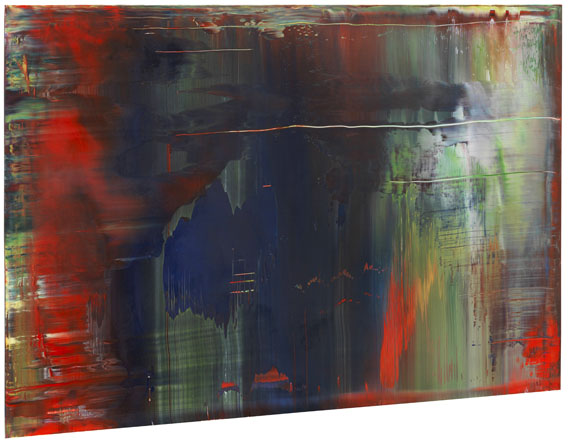