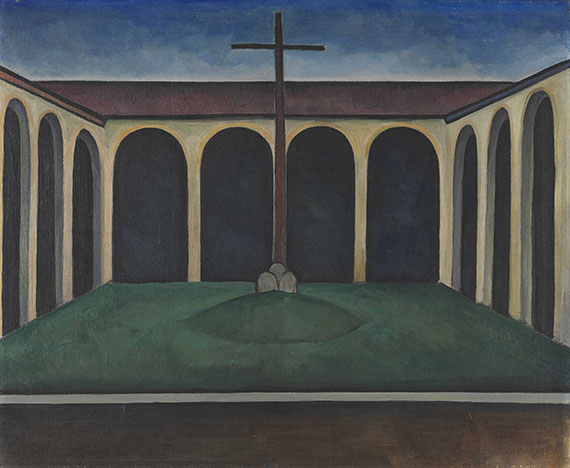 Important painting in the formal tradition of architecture paintings.
The work will be included into the forthcoming catalog raisonné by Dr. Michael Koch, Munich.

Alexander Kanoldt was born in Karlsruhe on 29 September 1881 as the son of the late classicistic landscape painter Edmund Friedrich Kanoldt. He began an apprenticeship as a decorative painter at the local Kunstgewerbeschule at the age of eighteen, but decided to join the Academy in 1901. He took drawing lessons with Ernst Schurth and became acquainted with Adolf Erbslöh. During this time Kanoldt closely studied Neo-Impressionist techniques, which inspired his technically extremely sophisticated color lithographs. In 1904 Kanoldt continued his studies Friedrich Fehr's painter's class and became his master pupil between 1906 and 1909. Kanoldt moved to Munich in 1908, where he founded the 'Neue Künstlervereinigung', a forerunner of the 'Blauer Reiter', together with Alexej von Jawlensky, Wassily Kandinsky, Gabriele Münter and others one year later. Kanoldt also took part in their first exhibition at Heinrich Thannhauser's Moderne Galerie in Munich in 1909. In 1913 Kanoldt, as well as Bechtejeff, Carl Caspar, Jawlensky and Klee, was a member of the "Münchener Neue Sezession". Kanoldt's artistic career was interrupted by the outbreak of the war during which, from 1914 to 1918, Kanoldt was drafted as an officer.

During a lengthy stay in Italy in 1924 Kanoldt produced multi-perspective architectural landscapes and serene interiors. These works mark a new beginning in Kanoldt's work and result in an invitation to exhibit works in the "Neue Sachlichkeit" exhibition in 1924 at the Kunsthalle Mannheim. His was the second largest group of works after Max Beckmann. In 1925 Oskar Moll invited him to teach at the Breslau Kunstakademie, a post that he gave up again in 1931. Together with Karl Hofer Kanoldt was founder of the 'Badische Secession' in Freiburg in 1927, in 1931 he opened a private painting school in Garmisch-Patenkirchen. In 1932 he joined the Munich artist group "Die Sieben" and exhibited at their shows. During this period Kanoldt mostly painted still-lives and Italian landscapes. Their rational style reflects a proximity to the "Neue Sachlichkeit". Even though he was appointed professor at the Kunstakademie in Berlin in 1933 his works were labelled "degenerate" during the Nazi regime and confiscated in 1937. For health reasons he had been forced to give up his post in Berlin one year before. He died of a heart disease on 24 January 1939. 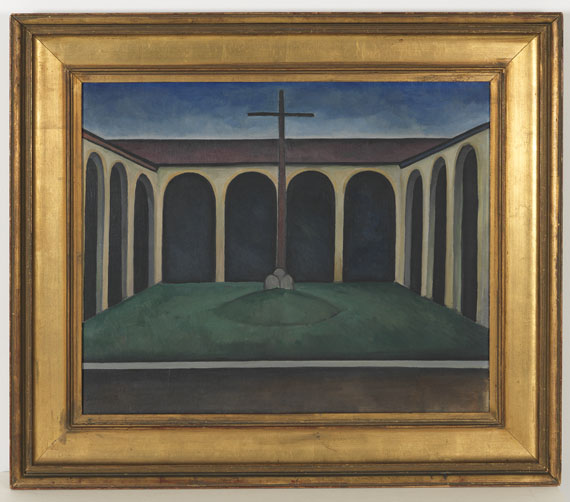