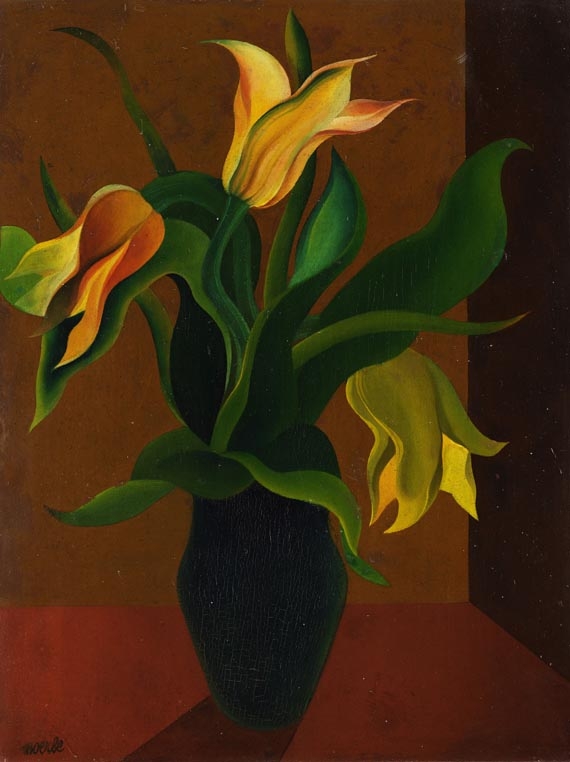 Tulpen in dunkler Vase. Um 1920/25.
Oil on panel.
Signed lower left. With several inscriptions on the reverse. 42,3 : 32,5 cm (16,6 : 12,7 in). Hoerle, who was close to the Rhenish Dadaists, was impressed by the New Objectivity canon of forms in the early 1920s, the period during which our picture was painted. Flower still lifes enjoyed special status in the New Objectivity movement because they represented a special version of colour and form mannerism. Hoerle has suffused the three tulips in this painting with a cool sensuousness based on sophisticated handling of the play of light. Each of them is stylised into an object in its own right that accordingly lays claim to making its own impact on space. Timelessness is invoked, an eternal beauty on an almost cultic scale that defies the law of inevitable decay. [KD]
EXPERTISE: We are grateful to Dr. Dirk Backes, Aachen for his help in cataloguing this lot
PROVENIENZ: Collection Fischer, Düsseldorf (with a handwritten ownership entry on the reverse).
Private ownership South Germany.

Good overall impression. Edges rubbed due to the framing. Small colour loss on the outer left margin. With barely noticeable craquelé on the vase and minor handling marks.