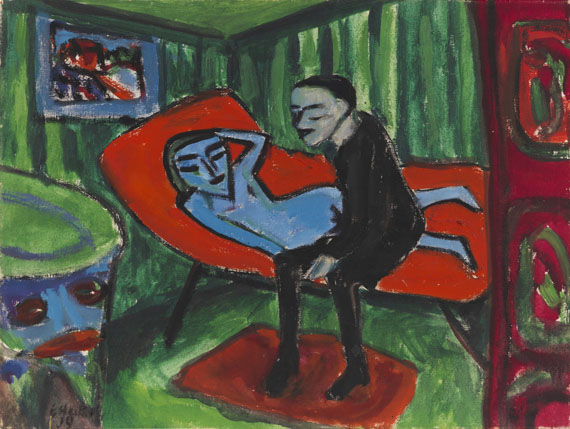 • 1910, the year the work was made, was one of the most formative years for the artist group "Brücke" and marked their artistic peak.
• The essence of the "Brücke" style finds expression in the energetic line and the radiant colors.
• The painting shows one of the most famous models: Fränzi, who became a "Brücke" icon.
• Impressive exhibition history.
• This work is one of the few preserved works from the artist's early period of creation.
•Of museum quality.

PROVENANCE: From the artist's studio (until at least 1964).
Galerie Wilhelm Grosshennig, Düsseldorf (presumably acquired or on consignment from the above).
Collection Hermann Gerlinger, Würzburg (with the collector stamp, acquired from the above in 1975).

Fränzi, the most popular model of the Dresden "Brücke" period, was occasionally accompanied by a boy to casually hang out at the studios. There is a photograph of the two taken by Ernst Ludwig Kirchner, and Heckel depicted them in drawings, graphics and paintings. In the drawing in the Gerlinger Collection, both are stretched out fully clothed on a couch. Fränzi turns to the boy, whose legs hang over the edge of the couch. On the left there is a table with a cloth, through which both the lounger and the spatial construction are visible. It is one of the quick sketches of life and the goings-on in the "Brücke" studios, in which the essential aspects of the body postures are noted with astonishing accuracy.

Fränzi is the young girl that Kirchner photographed twice: once with a playmate, presumably called Hans, in the studio at Berliner Strasse 65 in Dresden, and secondly as a portrait that, undiscovered for a long time, was published by the Kirchner Museum in Davos in 1994. She is just one of numerous models of the "Brücke" painters, perhaps the youngest, though. On a postcard dated February 3, 1911, Kirchner wrote to Maschka Mueller about a colored chalk drawing on the reverse: "Our youngest dancing". What Kirchner summarized in a letter to Erich Heckel applies to Fränzi: "There is a great attraction in such a pure woman, some things about can drive you crazy. Greater than in the older girls. Freer, without the finished woman losing. Maybe some things are more mature with her than with the more mature ones and wither away again. The wealth is certainly greater now." It wasn't Kirchner, but Erich Heckel, who was particularly close to Fränzi. And this little antic shows how narrow-minded the Wilhelmine morality of the time was, and how carefree the "Brücke" painters lived - and with them the models, including Fränzi. Fränzi can be found in several of Erich Heckel‘s works. A wax crayon drawing from 1910 bears her name in addition to Heckel's signature. In a graphite drawing he calls her "child", and in two color woodcuts he takes up her first name again: "Fränzi liegend", "Fränzi stehend".

The painting reflects the same spatial situation. The bright red lounger with the headrest tilted stands in the midst of the prevailing green. In front of it we see a small carpet in a darker red, which is also the color of the medallion curtain from Kirchner's studio that closes the picture on the right. The complementary contrast of red and green is complemented by the black of the boy's contours and clothing and the light blue of the flesh tones. Fränzi is lying naked on the couch, at the edge of which the boy is sitting, eyes downcast, in a somewhat tense posture. A shy erotic tension builds up between the two. The round table has been pushed to the edge and only half can be seen. Two brown ovals outlined in black with black circles and white highlights in the middle are to be interpreted as eyes. In this context, the broad, red slash corresponds to the mouth. These elements cannot be explained otherwise than that Heckel has undertaken an objective reinterpretation here. Since it only occurs in his case as an exception, it is all the more significant. The motif, composition and the shape of the face on the tablecloth are reminiscent of Edvard Munch's paintings and graphics, in which he addresses jealousy and envy.
The "Brücke" artists invited Munch to become a member as early as in 1906, but they received no response. In September 1907, Heckel met the Norwegian in person during his first visit to the Hamburg collector Gustav Schiefler. With Schiefler, author of Munch's catalog raisonné, he also found the opportunity to intensively study his graphic works. The lithograph "Eifersucht II" (Jealousy) from 1896, for example, shows a naked woman with a man in a suit in the right and the face of a man with wide-open eyes, coming together in a goatee like a triangle in the left. All of these elements also appear in Heckel's painting. Stylistically, however, Heckel is at a completely different stage of development. This picture in particular is one of the outstanding early examples of the distinctive "monumental" Dresden "Brücke" style with clearly composed areas of color, which in this case are applied particularly loosely, so that the ground shines through everywhere and gives the work a moving vitality. The picture can thus be understood as a homage to Edvard Munch, whom we now call one of the "fathers" of modernism. At the same time, however, it is the self-confident postulation of an own position, which approaches the subject with a new, direct view.

The studio as a self-created world
The motivic integration of the spatial situation is typical for the working method of Heckel and especially of Kirchner: the studio as a self-created world! The studio is not just a work space, but becomes a place of retreat in a self-created world of their own, especially for bohemian artists. Here the new freedom of the avant-garde is reflected, detached from all conventions of society. Art free of all constraints can only take place in a life free of all constraints. The studio is a creative space where art happens and bounces off the walls for inspiration. For us, the artists' premises are partly occupied by photographs, but also by their art itself, in which the studio becomes an image space. A rich decoration with mostly erotic wall paintings, wall hangings, carved furniture and sculptures of primitive peoples determine the appearance of the workrooms of the "Brücke" artists. Erich Heckel also designed his studio on Falkenbrücke 2a in Dresden, where he moved in 1910, according to his own ideas, after he had probably helped Kirchner furnish his studio on Berliner Straße. First of all, there is only a curtain in the Heckel studio with a pattern of rectangles lined up next to one another, which, as Schiefler remarked after a visit to the studio, could have been made using batik technique. The colors of the curtain can be derived from the painting "Kinder" from 1910, which can be seen on the right edge of the picture. A couch and a table complete the interior and a painting hangs on the wall. In the course of time, the decoration of the Heckel studio became more opulent, screens and ornamental wall hangings can be seen on later works. The workplace of the "Brücke" artists thus becomes a stage for social and amorous encounters and an important meeting place for intellectual life in bohemian culture.
Plus d'informations
+
Vendre
vous souhaitez vendre un objet similaire?
+
Enregistrement sur
Erich Heckel
+
Questions sur l´achat
+
Contacter l'expert
20
Erich Heckel
Kinder, 1909/10.
Oil on canvas
Estimation:
€ 600,000 / $ 600,000
Résultat:
€ 1,345,000 / $ 1,345,000
( frais d'adjudication compris)
Plus d'informations
+
Vendre
vous souhaitez vendre un objet similaire?
+
Enregistrement sur
Erich Heckel
+
Questions sur l´achat
+
Contacter l'expert
Offres sur Erich Heckel
+
toutes les offres
Ce qui pourrait encore vous intéresser
+
toutes les offres
Erich Heckel - Objets vendus
+
toutes les offres