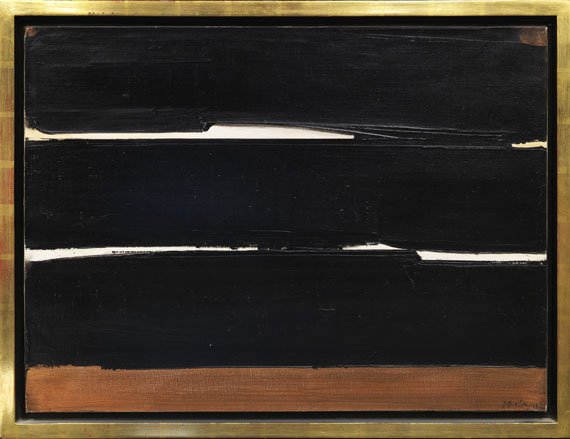 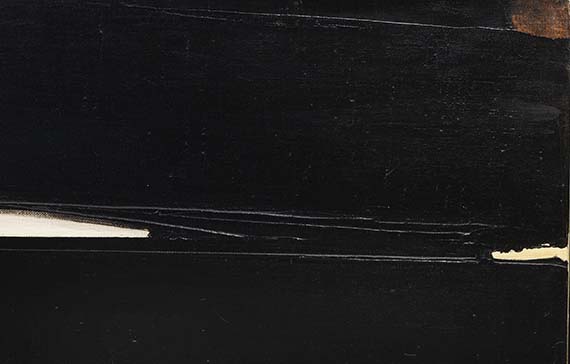 • Pierre Soulages is the most valuable living French artist.
• With the "outrenoir" Pierre Soulages reinvents black.
• The light reflections on the deep black, warm ochre and bright white surfaces is the actual means of expression.
• Works by the protagonist of European Modernism are in the collections of the National Gallery of Art, Washington, D.C. and the Centre Pompidou, Paris.
• On occasion of his 100th birthday in 2019, the Salon Carré at the Louvre hosted a grand exhibiton, an honor reserved to very few artists.

"Soulages is not the sole owner of the color black, but he has by his way of using it, left a mark never seen before, and has conjured worlds that are still undefinable."
Mogens Andersen, 1982 (https://galeriebirch.com/artists/international/pierre-soulages).

In the oeuvre of Pierre Soulages, influences from American artists such as Mark Rothko and Robert Motherwell are combined with inspirations from Asian calligraphy. From 1979, after an accidental occurrence in the studio when black paint spilled over the canvas of a painting, his color palette, which had always been limited, was predominantly reduced to black. In this completely black overlay, Soulage found reflections, structures and differentiations, even luminosity, which he describes as "outrenoir". With the term "outrenoir", Pierre Soulage formulates a denomination for the result of his personal confrontation with black. He shapes the black matter with wide spatulas, brushes, squeegees and blades, depending on the effect he wants to achieve, the light he wants to appear in the surface reflection of the black. In the resulting exclusively black paintings, the reflex lines moving in different directions determine the reduced and yet extremely interesting color effect. At the beginning of the 1980s, a renewed interest in expanding the range came up. In addition to blue, white (e.g. Encrevé 815) and a light to reddish brown (e.g. Encrevé 816) also began to appear.