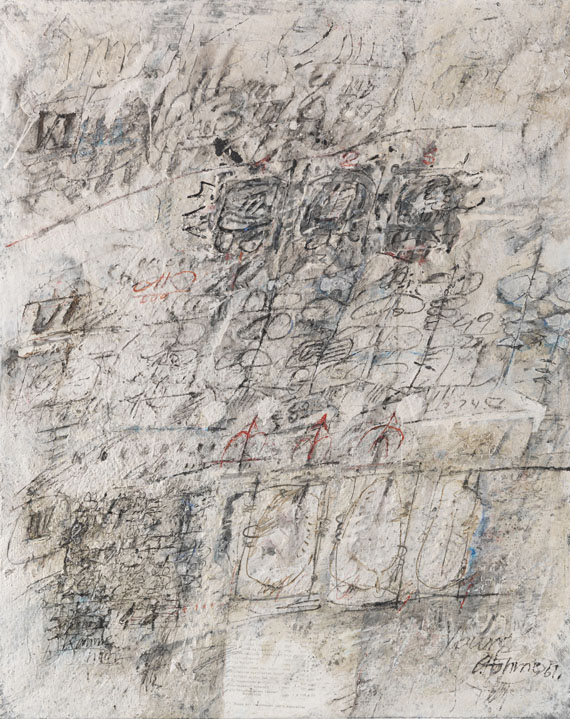 • Outstanding work from the small early body of works of the 'Sprachbilder', which are particularly captivating for their lyrical character
• The scriptural code's gestural freedom shows clear parallels to Cy Twombly's contemporaneous creation
• Remarkable document of Hoehme's early quest for the delimitation of the image space
• Other works from this sought-after series can be found at, among others, the Nationalgalerie Berlin, the Stedelijk Museum, Amsterdam, the Sprengel Museum, Hanover and the Staatsgalerie Stuttgart.

Essay
Based on informal beginnings in the 1950s, Hoehme developed an extremely versatile work in the coming decades, which is the result of a constant artistic struggle to remove the boundaries of painting from the surface. As early as in 1957 Hoehme commented on this strong desire as follows: "I have always reluctantly followed the laws of the surface. [..] I longed for the wide space, the third, fourth, fifth - upwards, to the side, to the front, yes even to the back, but without illusionist depth. One day I no longer stretched the canvas over the squared stretcher, but went the opposite way: with a large piece of canvas I had the field on which the events were to take place should. [..] "(quote from: G. Hoehme. Catalog Raisonné, p. 506). Like an "Ecriture automatique", an artistic gesture largely uncensored by the human mind, sketchy elements and fragments of notes lie like a curtain of scriptural ciphers over the pictorial background in the lyrical composition "James Joyce Epiphany". Encrusted layers of oil paint in earthy tones form the basis of the finely layered tangle of scatched lines and notes in black and red oil pastel, which spread out over the surface like a cave painting. The Irish writer James Joyce adopted the term "epiphany", which, in its original religious context describes the immediate revelation of divine power, as a literary stylistic device in his novel "Portrait of the Artist as a Young Man" (1914/15). In Joyce's work, the term "epiphany" loses its religious meaning but not the inherent metaphysical momentum of an inspiration that eludes the criteria of the human mind. With regards to his self-referential considerations, Hoehme must have recognized himself in Joyce's idea of the artist, according to which it is the artist's task to register this moment and the sensation of the epiphany and to use his special imagination to create an aesthetic image of it. Ultimately, Hoehme addresses the central question of the spiritual foundation of the artistic act of creation, of inspiration and the genesis of the artistic idea in "James Joyce Epiphany". A question that has long been important subject of theoretical considerations of numerous artists since the early modern era. Due to its self-referential subject, the present work is an outstanding example from Hoehle's small group of works of the “Sprachbilder“. In addition, the free graphic gesture, which in "James Joyce Epiphany" has freed itself from any sort of legibility and rhythm (cf. ZU, 1960, Nationalgalerie Berlin) shows clear parallels to the contemporary creations of Cy Twombly. In the course of the joint exhibition of Rauschenberg‘s and Twombly's work at Galerie 22 in Düsseldorf (1960) Hoehme met Twombly who would inspire his the development of Hoehme's scriptural work. However, the stylistic closeness of the two artists was short-lived: in search of a maximum delimitation of the picture, Hoehme soon turned to pattern sheets and string pictures, overcoming traditional limitations by incorporating unusual materials like long PVC strings that expand the canvas into the room. The artist left behind a decidedly versatile oeuvre characterized by a unconditional desire for delimitation. [JS]
Plus d'informations
+
Vendre
vous souhaitez vendre un objet similaire?
+
Enregistrement sur
Gerhard Hoehme
+
Possibilités déenchère
+
Enchère par téléphone / Enchère écrite
+
Questions sur l´achat
+
Commander le catalogue
+
Contacter l'expert
120002343
Gerhard Hoehme
James Joyce Epiphanie (Hommage), 1961.
Oil, oil chalks and paper collage on canvas
Estimation: € 50,000 / $ 58,500
Plus d'informations
+
Vendre
vous souhaitez vendre un objet similaire?
+
Enregistrement sur
Gerhard Hoehme
+
Possibilités déenchère
+
Enchère par téléphone / Enchère écrite
+
Questions sur l´achat
+
Commander le catalogue
+
Contacter l'expert
Autres images 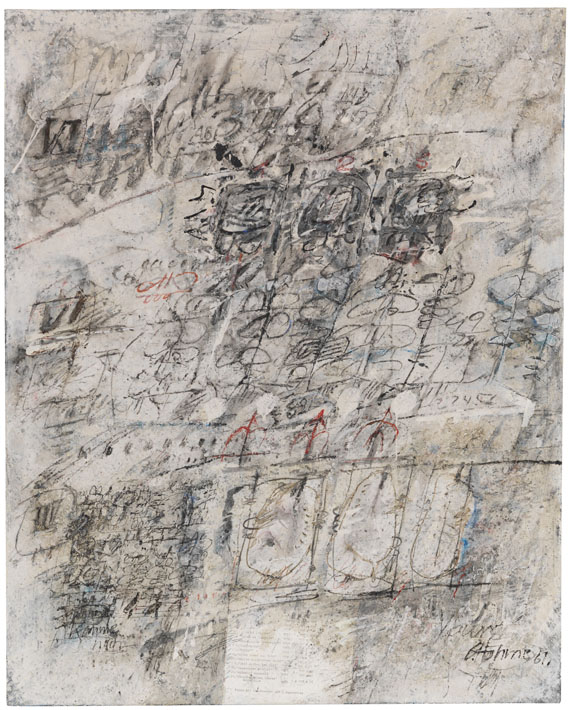 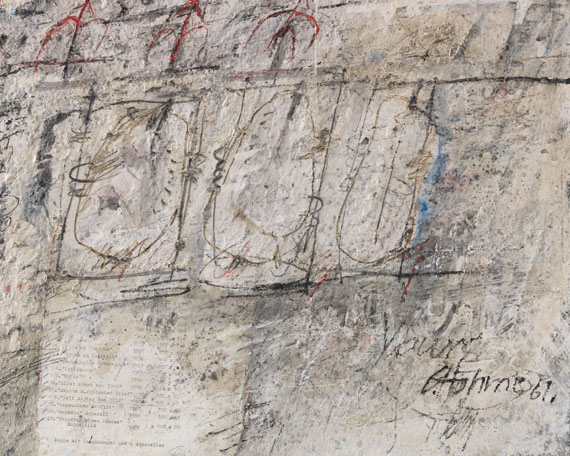 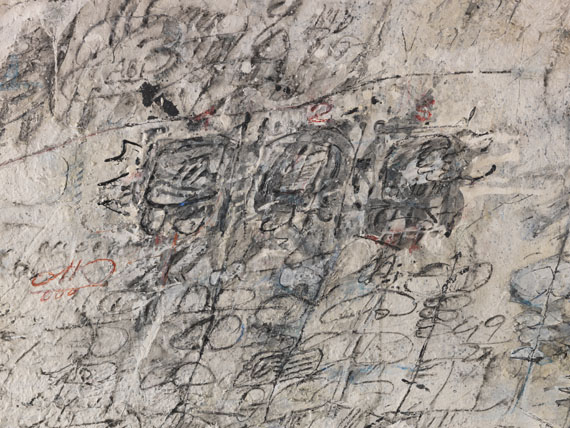